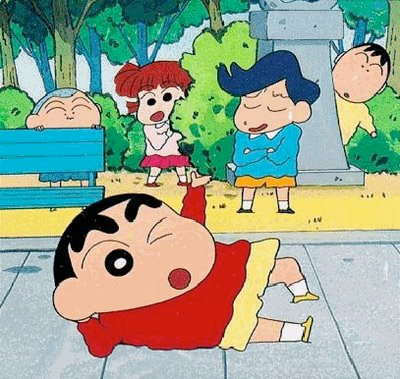 My brother and I watched it on TV as teenagers in Hong Kong. Our mother stood behind us, telling us not to watch it but unable to avert her eyes or suppress her laughter. Then we saw babies on a Japanese game show watching it. Such is the power of the absurd, inappropriate fun that is Crayon Shinchan (クレヨンしんちゃん, 1992-present). But it’s not R-rated humor; the main character is a kindergarten kid and the stories are all set in a suburban, domestic Japan.

To draw a crass analogy, Shinchan’s a bit like Japan’s version of the Simpsons. If nothing else, both cartoons have been running for over 15 years. 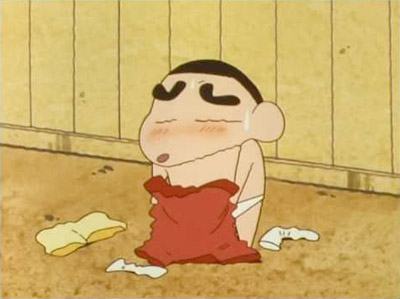 Crayon Shinchan has become successful abroad as well — I’ve seen it being well received in both Taiwan and Spain, as well as back home in Hong Kong. Unfortunately the US debut I saw on the Cartoon Network was a bastardized affair with a new, nonsensical talk track over the cartoon (advice: avoid at all costs).

The cartoon is based on a comic of the same name. Unfortunately, its creator died prematurely from an accident in 2009 and the final issue of the comic was released in February 2010, putting an end to a 20-year run.