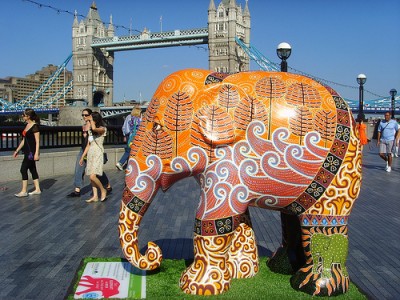 London, following in the footsteps of several North American cities (and some in the Netherlands), is being overrun by ceramic animals. Indian fiberglass elephants, to be precise. The white, richly decorated creatures have been “adopted” by a number of celebrities (from the logical artistic bunch including Kriti Arora and designers Isaac Mizrahi and Lulu Guinness, to the slightly more eccentric such as IPL leader, scandal-plagued Lalit Modi). The goal of this Elephant Parade campaign is to raise awareness and money of the plight of the Asian elephants (apparently they’re in danger of extinction). The elephants will be displayed until July, after which they’ll be auctioned off. 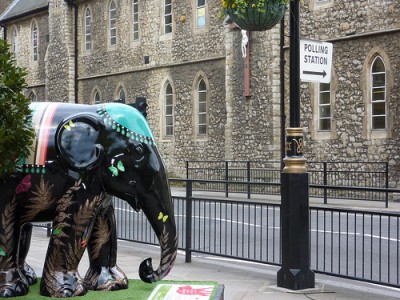 It would be nice to know how the adoptive parents were selected (I wouldn’t mind seeing more Indian artists on display) or what inspired the various designs but, in the absence of more information, let’s enjoy the bursts of color throughout London. And, if you’re unable to afford the auction prices, mini (albeit slightly gaudy) elephants are available for sale at tony and touristy department store Selfridges.