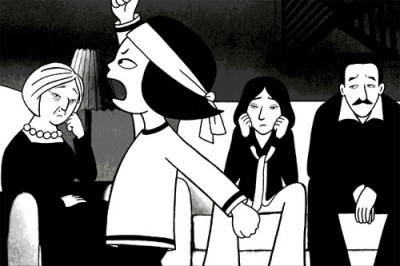 When I was living in the US around 2003 to 2005, I often saw Persepolis (the book, released 2000) on display in bookstores. There was a renewed interest in serious comic books, or graphic novels, at the time, and Persepolis was one of its chief champions. The story centers around a girl with a rebellious streak growing up during the Islamic Revolution in Iran circa 1980. So not only is its story serious, but very relevant in the years following 9/11 in the US, when the national caricature of Muslims had gotten rather out of hand.

Like many other people, I bought a copy of the book, but actually, I didn’t enjoy it very much. Maybe it’s because I was missing the historical knowledge, or because I prefer chapters long not short, I’m not quite sure. Regardless, it did have enough charm that when the movie came out, I went to see it with my Iranian-American friend. To my surprise, I loved the movie.

Persepolis (the movie, released 2007) is based on the book, but has some new flourishes. The additions include a single linear plot (the book had many small chapters), beautiful animations and extra plot framing created by a few scenes of the author in the present. Apparently, other people also enjoyed the film, as it went on to win the Cannes Jury Prize that year, sparking a storm of controversy back in Iran for negative political implications.

My Iranian-American friend loved the film as well. I think he was on the verge of tears at the end of the movie.