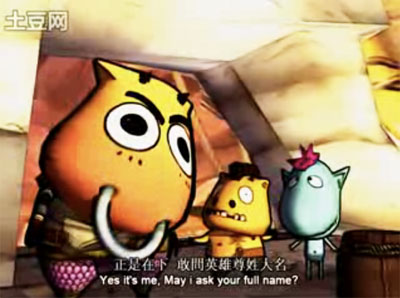 I first discovered I am MT (我叫MT, 2009-2010) while reading an article about the Tudou Video Festival Awards 2010. Tudou is one of China’s Youtube clones and its annual awards ceremony was once dubbed by a friend as China’s Sundance Festival. While this claim is probably not accurate, it does show that online video in China is a big deal. And within the 2010 Tudou awards, the team behind I am MT garnered the the most popular video blogger award.

Currently airing its third season, I am MT is an animated online TV series that is set loosely in the universe of the World of Warcraft (a giant online game where lots of people play together to kill monsters, one another and then level up). Each episode is 24 minutes long and features various cute SD characters hanging out, fighting one another and questing within the game’s world. The plot has elements of both medieval fantasy and slapstick humor.

Aside from slapstick, it also employs what people in China call e-gao humor. E-gao has been translated as “spoofing”; it’s a type of parody that borrows heavily from the original cultural work. In this case, I am MT makes fun of the World of Warcraft setting as well as borrowing theme songs and visual elements from Japanese pop culture.

Unfortunately, I find the writing weak and the pacing erratic. But then again, as a non-World of Warcraft player, I’m not the target audience. See for yourself though, all episodes starting from season two have subtitles in both English and Chinese.