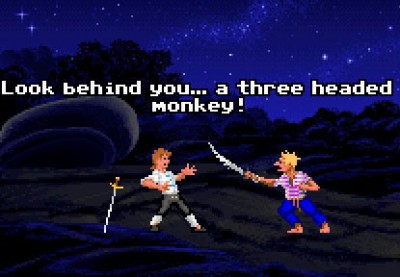 The Secret of Monkey Island (1990) is probably one of the only adventure games I’ve finished — because it’s actually really witty from beginning to end. For example, the screenshot above is a sword fight scene that is won by hurling the best insults/retorts (you pick from a list) at your opponent. A bit silly, yes, but why should a computer game about pirates should take itself seriously?

It also happens that the Secret of Monkey Island is a classic of the “adventure games” genre. In this case, you have a set of actions, items and dialogue options, all of which you use to advance the plot. The game is beloved enough that’s studios have constantly been created remakes of it for modern platforms, be it the iPhone or the PS3.

The genre itself has gone through a revival recently, particularly thanks to Telltale Games (who have coincidentally and recently written games in the Monkey Island universe). Adventure games were one of the most-played genres in the 80s and 90s, back before first-person shooters became a mainstay of American games. The Secret of Monkey Island was a gold standard for adventure games at that time. Toward the end of the 90s, various reasons led to the genre’s decline, though elements of its puzzle-solving nature made it into other types of games. It wasn’t until the past few years, when indie games could be made at a small-scale and low cost, that adventure games have slowly risen back… but never quite so high as they once were.

What’s not to love about a game that tells us how Guybrush Threepword, nerdy boy and aspiring pirate, rises to fame? 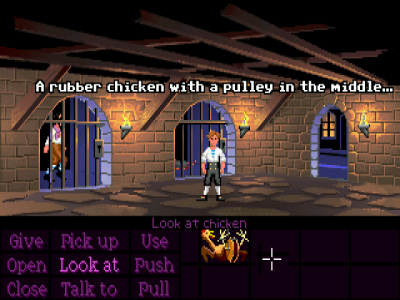