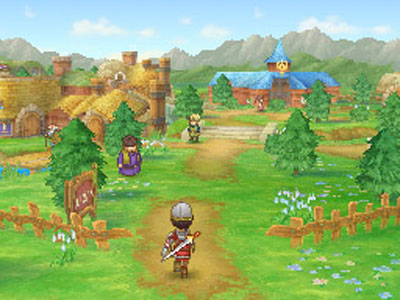 In some circles, the Dragon Quest series is best known as the progenitor of an urban legend: That the Japanese government outlawed releasing the game on a weekday, because when they did so in 1988, masses of people skipped school and work to buy it. The part about the government is false; but the part about people skipping school or work is true. And the fake part is not far from the truth, because in 1988, the publisher declared it would release all future Dragon Quest games over the weekend.

Fast forward ten plus years, and we’re at the ninth installment in the series, and the first time that a Dragon Quest has been created on a mobile device (Nintendo DS). Dragon Quest IX (2010) is a classic Japanese roleplaying game. Basically you are a young boy or girl (you get to choose) on a quest to save the world in some way. To do so you have to wander the world, find important items, help villagers solve problems and battle many foes. Battles happen one turn at a time and you select which weapon, item or magic spell to use on your enemies.

Most gamers also describe the Dragon Quest games as “old school,” which is both appreciative and pejorative. It is the former because the game is a carefully evolved creature; it features few pointless frills and its game mechanics are relatively straightforward. It is the latter because it hasn’t changed very much in the past twenty years and lacks a strong narrative or game-mechanical streak. Both of these accounts are true. I enjoy the game because it’s pleasant, well-paced and polished. (It is also, this time around, well-translated. E.g. A set of Shell Armour is described in the game as “an uninspiring piece of armor that nonetheless shelldom lets you down.”)

I think Dragon Quest IX is easily the most accessible game within the series in the last ten years. Videogame critics have complained that DQ IX lacks a strong story or strong characters. But frankly, if you’re playing it for those things, you’re playing the wrong game. Where it does shine is its switch from random encounters (videogame lingo for battles that randomly occur when you are wandering about, without any sign beforehand) to visible enemies (they now notice you, and chase you, but you can also avoid them). This makes wandering around the ruins fun, as opposed to a time-consuming chore. Of course, whether this new-found accessibility will prove enough for the North America remains to be seen. It has been more than a decade since the series has managed to do well outside of Japan. 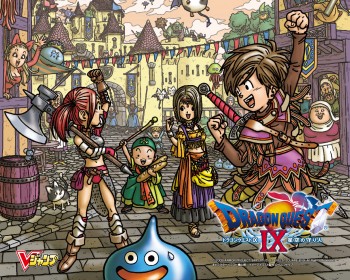 Bonus (see image above): Much of the concept art and character/monster design is done by Dragon Ball’s Akira Toriyama.