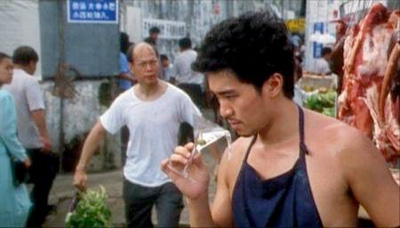 Stephen Chow controls the canon of humorous film in Hong Kong. Although today both he and fellow hometown heavy-hitter Jackie Chan have made their peace with the dictators in Beijing and pledged to use only Mandarin, the language of bureaucratic boredom, in their future films, Chow built his name on the intricacies of Cantonese street humor, often directed at the lifestyles and manners (or, typically, lack thereof) of the so-close-yet-so-far mainland government and people just across the border from British Hong Kong. Chow’s films are all, in some sense, genre flicks: gambling, kung fu, sports, vampires, and so on–if you can see it in Shaw Scope, you can see Stephen Chow riff on it in at least one picture. But unlike most genre productions, these films are virtually always character vehicles, primed and ready for the comedian’s own brand of slapstick, pun-heavy stupid brilliance. Other films are actually sheer rip-offs of then popular Hollywood blockbusters, and he even managed to milk two pieces out of Jim Carrey’s The Mask. (Chow is often touted as the Chinese Jim Carrey, but make no mistake: the intelligence of Cantonese comedy ups the ante exponentially.) 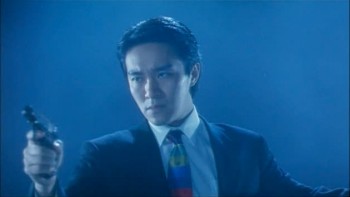 One of the proudest moments for such knock-offs was itself a poke at mainland Chinese manufacturing knock-off cultures: 1994’s From Beijing with Love (or, in Chinese, 007 Made in China or Paint Poured in China). Stephen Chow is a deep undercover sleeper cell–to call a spade a spade, he’s a dirty martini-swilling butcher at the local wet market who never pays his hooker bills and lies in wait for the day Beijing calls with a task for the secret agent. Sure enough, he is brought into the fold after a secretive “Man with a Golden Gun” steals a tyrannosaurus (or, as Chow notes, “the one from Jurassic Park that goes RAAAWWWWR”) skull from the People’s Liberation Army. Before the agent is dispatched to Hong Kong, he is walked through a laboratory with shoddily “made in China” gadgets: a flame-throwing umbrella, a portable stool for staring down enemies, and, best of all, a flashlight that only lights up when the lights are on.

There are, of course, a number of twists and turns that I’ll leave to you to watch for yourself, but rest assured that by the end of the film our cleaver-wielding swordsman has been given a novel piece of calligraphy from Deng Xiaoping himself–a parody that would never make it past the self-censoring process of today’s Stephen Chow empire. So go forth, and watch our hero avenge the death of an innocent man just before imitating Jackie Cheung at a pool party, the last stop in a night that ends with porn-fueled bullet home surgery–but for the full experience, get it on VCD, or even VHS.

You can read more about it on Wikipedia or IMDB.