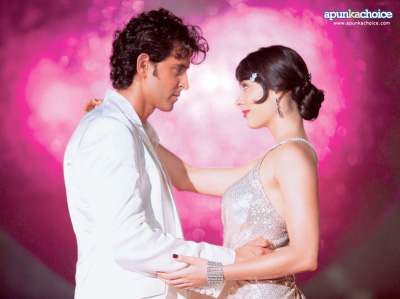 Say the word “Bollywood,” and what does it evoke? Probably color-coordinated dancing girls, melodrama, and a sinking feeling at the thought of having to spend the next four hours of your life watching a movie.

Firstly, it gently insists that the name should not be “Bollywood” – a derivative term that suggests that Hindi films cannot be taken seriously unless they associate themselves with American films – but “the Hindi film industry.” The story revolves around an actor, played by Zoya Akhtar’s brother Farhan Akhtar, who’s trying to become a star in Bombay. In other words, it’s a Hindi film about the Hindi film industry, which is pretty rare. It provides privileged access to the real-life behind-the-scenes machinations that go into making movies in the world’s biggest dream factory (800 films per year at the last count).

The movie being made within this movie is called Pyaar Ki Aag (Love’s Fire). As its title suggests, it is chock-a-block with every Hindi-movie cliché you can imagine, and Zoya Akhtar uses it to satirize the industry’s foibles. However, she does so without bite, and Luck By Chance can be considered an affectionate love letter to the industry of which it is itself a product.

What distinguishes Luck By Chance is its vision of how Hindi films can be better. For instance, it suggests that films can keep their songs – Luck By Chance, like most Hindi films, is a musical – but the songs can be overlaid with the opening and closing credits, instead of disrupting the narrative every few minutes. The male and female leads can fall in love, but their romance does not have to be pristine, and it does not have to end in marriage. Zoya Akhtar leads by example, creating a film that serves as a guideline to how the Hindi film industry can both retain its tropes and deploy them more effectively.

Did I mention that Luck By Chance is also very funny? Below, Pyaar Ki Aag’s director, his sister, the sister’s husband, the film producer, and the producer’s wife pray to the Hindu pantheon to ensure the success of their movie. Hint: the gods listen. 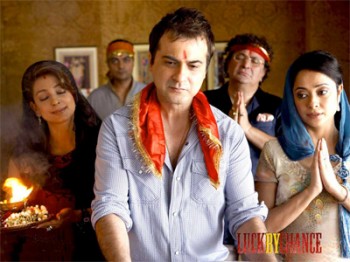