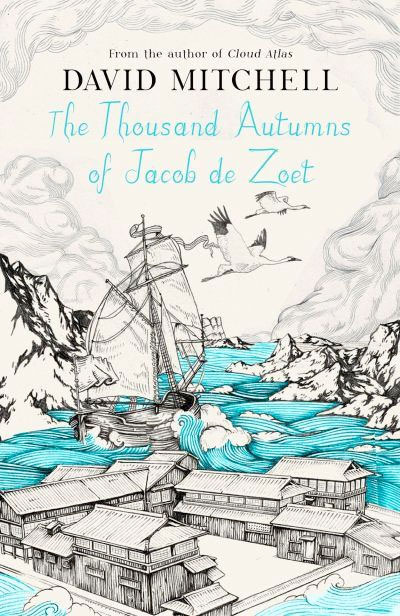 Last week, when I was on page 200 of The Thousand Autumns of Jacob de Zoet and was so entranced I was able to completely ignore the extremely large and somewhat smelly man sitting beside me on the BART, a woman leaned across the aisle with wide eyes and said, “How did you manage to get that out of the library?” I grinned and informed her that I had put a hold on David Mitchell’s newest novel two months before it was released, and therefore managed to ensure that as soon as the library got it, I did. I spent the next week in a haze. It is one thing to feel you can’t put a book down when there are fifty suspenseful pages left. It is quite another to feel like that for 250+ dense pages. At the end of the morning’s train ride to work I had to wrench myself away from the book. Over the weekend I declined invitations to actual events with actual humans so I could sit at home and gobble it up. When I finally came to the last page, I was relieved (I had my life back) but also terribly sad. I have not been so taken by a book in a long time (and I am a person who gets kidnapped by books at an alarmingly frequent rate).

So what is this wondrous book about, you ask? The short answer is that it’s about Dutch merchants in 18th century Japan. I know, that does not sounds very exciting. I like historical fiction, and even I was intimidated by the obscurity of the situation. But David Mitchell is a consummate storyteller, and it doesn’t, in the end, matter what world he chooses to write about (as he amply demonstrated in his celebrated novel Cloud Atlas, which was the inspiration for my early hold on this one), his characters and his gorgeous prose make it entrancing.

David Mitchell is British but he lived in Japan for a number of years, both in his twenties (when he met his wife, who is Japanese) and more recently, researching the book. Besides being shortlisted twice for the Man Booker Prize (for Cloud Atlas and his second book, number9dream), he’s garnered a few best-young-novelist listings (Granta, Time) and a crowd of rabid fans (one of my friends ordered the new novel from England because it came out two months earlier there).

Slightly more detail about the book itself: The main character is the eponymous Jacob de Zoet, a clerk for the Dutch East Indian Trading Company, out to make his fortune so he can marry the girl he loves at home. He’s religious, intelligent, and much more breakable than bendable. As a deep-down goody-two-shoes, I adored him, even if I did want to hit him sometimes for his sheer stupidity and stubbornness. Jacob falls in love with a Japanese midwife named Orito, the scarred daughter of a scholar. Unable to even leave the Dutch-leased man-made island off the shore of Nagasaki without an escort, Jacob doesn’t have much hope of pressing his suit, or of helping when Orito is sold to a sinister but powerful abbot to take vows at his mountain shrine. There follows rescue attempts, conspiracies, a love triangle, Dutch sailor/slave stories, some British attempts to take over the world, and lots of other exciting happenings.

I’m not sure if the summary makes it sound wonderful or absurd. I’d quote some of the luscious writing here to give you a better feel for the book, except that after finishing it I returned it immediately to the library, thinking of that woman on the train with her hungry eyes. I recommend a bookstore if you want to get your hands on a copy in the next three months – and believe me, you do.