Though they’ve been around since 1996, Chinese pop/punk/electro outfit New Pants (新裤子) continue to sound fresh and…new, keeping a trouser leg up on the competition by constantly evolving and churning out consistently excellent songs, videos, and live shows. Released in 2009, Go East is a best of disc that covers the Pants’ output from 1998 to 2009.

Originally known as The Structural Metal Workshop Master (金属车间的形体师傅),  the band switched to New Pants in an attempt to set themselves apart from the preceding 20 years of rather earnest Chinese rock and roll. Though influenced by new wave, New Pants’ aesthetic is heavily informed by the snarkiness of The Ramones, a love of disco, breakdance, and track suits, and a massive dose of whimsy. 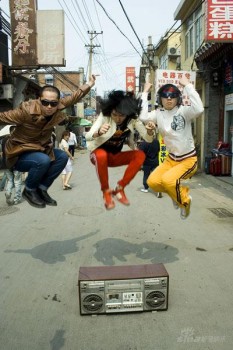 Millionaire Peng, the lead singer and director of most of the band’s hilarious videos, bears little relation to Cui Jian and Chinese rock’s other serious troubadours. Peng and keyboardist Pang Kuan (aka Fox Pang) both went to art school and own hip shops in Beijing. New Pants combines the genre-fusion of The Talking Heads with The Sex Pistols disdain of subtlety — two more bands whose visual arts training manifested itself in their music and image.

While their music ranges from pop punk to New Wave, the band’s visual aesthetic is consistently goofy. In the Pantera parody of “Savages Also Have Love” (野人也友爱) and the “Dragon Tiger Panacea” (龙虎人丹) kungfu-spoof, New Pants shows a love for the absurdity of pop culture that is rather, well, earnest.