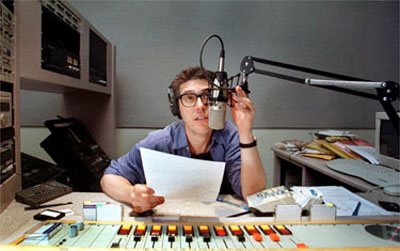 “This American Life? Is that that show by those hipster know-it-alls who talk about how fascinating ordinary people are? Gawd!”

That piece of silly dialogue from TV (specifically the OC) just about sums up the This American Life radio show (1995-ongoing). Host and co-creator Ira Glass agrees; he responded to the reference weeks later with an emphatic “yes!”

Each episode of This American Life follows a theme, and attacks this theme from multiple angles in a series of acts. Some themes end up working better than others — take the week they did the Giant Pool of Money for example, a in-depth audio documentary on what brought on the financial recession of 2008, or Notes from Camp, a glimpse into the heads of those for who think  camp* is the best time of their lives. Those were both excellent. On top of featuring interesting topics, each episode of This American Life is beautifully produced: narrated by a man with a permanent cold (his voice grows on you after a while), each story is packaged like a non-fiction fairy tale and each segue is meticulously crafted.

Yet the pretty packaging is also its downfall: Many find This American Life way too damn cute for its own good. Despite having won numerous awards in radio, including two Peabody’s, the show continues to be stereotyped as an opiate to liberal, middle-upper class Americans. Yet it’s a fair critique: The show is not out to provoke or shock (though it seems to have taken more of a social justice bent recently) and its personality is of a genteel observer passing by. Wherever its social merits lie however, few other shows give such an accessible and well-scripted look into other people’s lives, be it through an edited interview, readout of a memoir or recordings from the field.

In this World Wide Pop post, I’m highlighting episode 109, Notes on Camp. In it, Glass & co. investigate the glorified idea of camp* and walk away with an answer… kind of. In typical This American Life fashion, the episode heavily features other people’s voices, is interrupted only sparingly by staff narration and focuses on the lived experiences of camp participants. (No theories by social scientists are cited.) The topic is approached skeptically and with a heavy air of irony — one of the acts in the episode investigates why it is that people extreme such emotional highs at camp, and end up bawling in tears. Check it out. It’s free.

* “Camp” in the US often refers to the summer camps that kids and teens get sent off to, joined by other kids and teens, to be supervised by college students and a light staff of adult administrators. Camps can be themed (e.g. drama) or cater to certain groups.