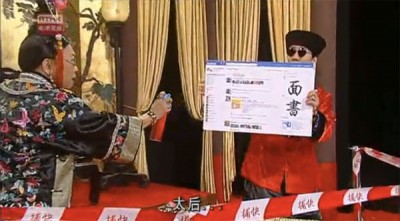 Headliner (頭條新聞, 1989-present) is, my family likes to joke, the last show that survived the attacks on free speech in Hong Kong. Legally speaking, Hong Kong does indeed have a freedom of press, but in reality, the radio and TV programs that were more critical of China have been kicked off the air in various ways. (Like daily death threats by phone.) Headliner remains intact because it speaks indirectly and in abstract* about social-political issues. Its geographic focus is Hong Kong, China and the rest of the world, and in that order of priority.

Assuming you’re up to date on the latest issues, the show is funny. For example, the above screen capture is about the Chinese government blocking access to Facebook inside Mainland China — the queen (left) represents China, and the stooge (right) is her servant who brings out things. The placard the man is holding says, literally in Chinese, “face” + “book.” (Not all their skits are in period dress; see the screen capture below.)

Headliner is also a production of RTHK, the main public broadcaster in Hong Kong.

* For China-savvy readers out there, Headliner‘s abstraction is simple metaphors, not weird code words that people have to use in China to avoid the filters. 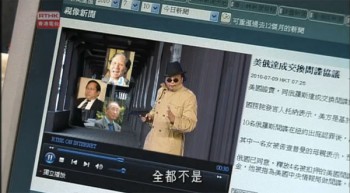