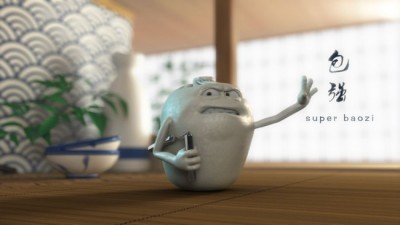 Look up in the sky it’s a bird, it’s a plane, it’s…. Super Baozi. Yup, the savior of Chinese animation, at least in the eyes of some, is the steamed bun superhero created by Sun Haipeng (孙海鹏). While some of Super Baozi’s skills are a bit prosaic — rocking a crowd for example — the dough puff has caught on big in China, and launched the reluctant Sun to the forefront of China’s CG scene.

The first clip of the three bun animations, “Super Baozi vs. Sushi Man” (超级包子大战寿司侠), a quirky remake of a classic Bruce Lee scene, went viral, garnering 10,000,000 hits in its first weekend online. The clip shows doughy old Super Baozi taking on a crew of sushi opponents, dispatching them neatly with a pair of nunchuks. Sun turns a rather silly premise into a quick video shot through with quirky humor and detail — the fear response of one of the sushi rolls still has me laughing weeks after I first saw it. I don’t know how he managed to think that up, but it’s brilliant. 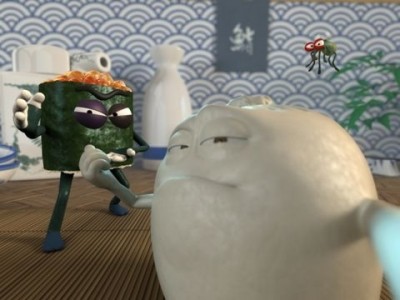 What makes the success of Super Baozi, both artistically and statistically, so remarkable, is that Sun is self-taught as an animator. At school he studied watercolors and only moved into animation in an attempt to find a way out of the metal sign shop he was working in. He worked on the Super Baozi animations on his own, taking two years to create the first short animation. The success of Bun Man has taken Sun to Shenzhen where he works as an animator, but he still feels China has a ways to go before it catches up with the more mature animation sectors overseas. He is surprised people see his work as so important for Chinese animation, and by proxy, Chinese creativity, and feels pressured by these champions.

While he doesn’t attach any special significance to the nationalist aspects of the Sushi vs Baozi match, he does try to fill his videos with Chinese characteristics. Sun believes that though the West may currently have the edge in creativity, and a more supportive, less-restricted working environment for animators, China has a rich cultural legacy for artists to work with. Chances are your TV or computer is already made in China, perhaps before long, the characters in your videos and movies will be as well.

Super Baozi vs Sushi man from sun haipeng on Vimeo.