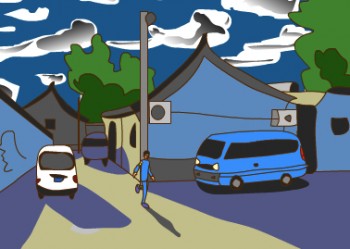 A photojournalist by trade, Wen Ling (温凌) has an unusual dedication to telling stories through images. In 54boy.com, a short, silent animation laced with Chinese characteristics, we find him more relaxed and more lyrical than in his other works. The result is a work that is by turns melancholic, funny, and hopeful, proving that youth isn’t all innocence, and age isn’t all jaded experience.

Wen Ling launched the ziboy photoblog in 2001 — a frequently updated informal documentation of his life in Beijing and travels abroad. His documentation of everyday life continues in the cartoon Potot, in which line drawings portray incidents of everyday life. Though punctuated by the occasional speech bubble, Potot also relies on images to look inside the mind and emotions of its characters. As with the photoblog, even these intimate glimpses into the mind and life of its creator are tinged with a slight sense of  detachment. Even when he steps from behind the camera, a distance still remains.

54boy is  a touching portrait of a young teenage boy. In the brief period of time we spend with the character, we enter into the warping of reality, fantasy, and time that accompanies adolescence. The scope of the video could be a few hours in the life character; it could also be a few years. 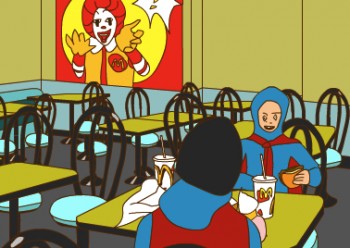 The animation travels vertically, starting on the streets outside the main character’s school, and rising eventually to a rooftop pool high above the city. The spatial changes mirror the flight of fantasy that propels the character to this location, a daydream that involves violence, revenge, girls, fast food, and superheroes. Though the themes of adolescent alienation and escape are universal — the film is effective in communicating it’s message without words — the video is full of touches unique to modern China. From the picture of Confucius on the wall of the classroom, to the hutong lanes, to the McDonald’s where the main character and his super lady friend grab a beverage and a burger, Wen weaves together the sometimes disparate elements of the urban Chinese environment with the same ease he blends the main character’s physical reality and soaring daydreams.

Though adolescence is a time of confinement, 54boy is Wen’s most optimistic work. The animated format seems to allow him, like the main character, to sore above the awkwardness and social confusion, to close the distance between dream and reality, and create a work of art where it’s creator at last seems to truly feel at home.