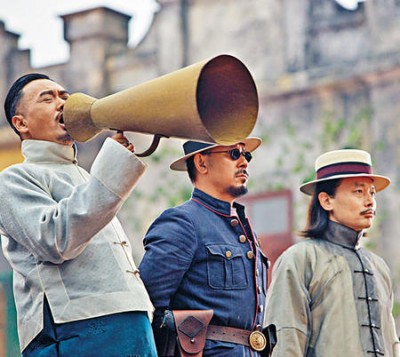 Let the Bullets Fly (让子弹飞, 2010) is an immensely enjoyable, entertaining and engrossing blockbuster, particularly by the standards of mainstream films released on time to catch the action split between the two new year holidays on the solar and lunar calendars, respectively; this should be said first and foremost, and without reservation. I say this because Bullets is also an indubitably loaded film: director and leading man Jiang Wen is a darling of the critical and festival circuits, and the fact that he here shares the screen with legendary actors Ge You and Chow Yun Fat has predisposed many observers to expect that this, finally, will be the film to show the world that China can produce world-class cinema outside of the art house and with Hollywood production values. The nationalists and the critics alike will be disappointed. Sure, this is a thoughtful film in the tradition of Quentin Tarantino, a genre-oriented send-up of the Spaghetti Western, but it also borrows a large portion of its aesthetics and imagery from Stephen Chow’s recent landmark Kung Fu Hustle. For Jiang Wen the Western, transposed onto the early warlord years of Republican China, presents a compelling political allegory, albeit one not specific to our current cultural moment, but the addition of cartoonish action scenes and post-Hong Kong cinema gangland relationships cannot help but evoke comparisons with the former film.

Many critics will try to convince uninitiated would-be viewers that Bullets is a masterpiece of discordant narrative with a complex plot that becomes all but impossible to follow; this is a blatant lie. Ge You, playing a fraudulent bureaucrat named Ma Bangde, pretends to be a professional political advisory known as Tang Shiye in order to avoid the wrath of mountain bandit Zhang Mazi, played by Jiang Wen himself. Jiang then happily assumes the identity of mayor Ma and the pair saunter along to a town (shot in Guangdong but set in western Sichuan or Xikang) controlled by aristocratic mobster Huang Silang, portrayed by Chow Yun Fat. Fireworks ensue when these three characters put into practice their triangulated understandings of wealth and justice–and that’s all there is. The bulk of the film, spanning more than two hours in total, is simply concerned with who gets the money, who gets the girl, and who gets to go home (hint: that would be the people, the right-hand man, and the straight-talking outsider with the unpocked face, respectively). This is not a complicated film, but people will see what they want to. In Beijing and Hong Kong these days it has become fashionable to suggest with a wink and a nod that there is some deeply rebellious political message within the film (as there was with Jiang Wen’s earlier, less mass-market cinema), but this too is bunk. Corrupt officials? That’s a state of being for all of contemporary Chinese culture, much less that concerned with the Qing and Republican periods. A Robin Hood figure? Sure–one straight out of the Water Margins. Those who would have us believe that the film involves complex narrative and profound political leanings are often one and the same, and their justification often calls for a fluent understanding of Chinese culture; Edmund Lee, writing for Time Out Hong Kong, insists that the intricacies of the movie require “a native Chinese to fully appreciate.”

On a linguistic level he may be not be far off the mark. The dialogue is sharp, quick, and witty, delivered in a somewhat poetic mode closer to classical Chinese than the dry and analytical Mandarin (or its colloquial regional offshoots) to which we are so often subjected in mainland cinema. Adapted from a novel by Sichuanese writer Ma Shitu, this brilliant screenplay is naturally aided by acting of the first tier. Ge You, as we have come to expect, plays the same character he has for several years now: the spoiled but clever Beijinger who suddenly finds himself in the provinces. Fortunately he knows the role well, and never misses a beat in the lighter scenes; we might hope for a touch more grace during the sentimental moments, but that could be a long time coming. Chow Yun Fat does not, contrary to several reviews, present the worst performance of the film, but actually does a commendable job splitting the two major sides of his screen personality into two distinct roles: the serious (and seriously wealthy) man of action is funneled into his major character, while the comedic self-serving clown goes to a body double (also played by Chow) that we may suspect was created for precisely this purpose. He is, through no fault of his own, hampered by a poor mastery of Mandarin that leads rather to the pathetic dubbing for which made-for-TV Chinese movies are so renowned. Jiang Wen steals the show completely, perhaps not out of his innate acting prowess but rather because he is, in person as on screen, a deadpan badass who has been waiting his entire career to act with such gravitas in a role of his own invention. 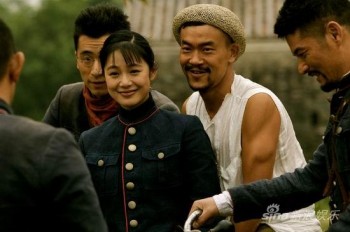 So what do we take away from all this? That Jiang Wen has moved away from political and historical intervention and is now more concerned with fabricating an allegory of the film industry proper within the hollow shell of the former style–a commendable strategy for making the notoriously difficult leap from the festival circuit to mainstream Chinese theater rotation. That no one, no matter how greedy, is ever actually in it for the money alone, and that there is always a measure of power and virtue hidden within both the most profoundly corrupt officials and the most alienated activist outsiders. That no mob boss is any stronger than the sum of his minions, and that the people are a righteous force impelled to action only by the machinations of the powerful.

And of course, as we enter the centennial anniversary of the Xinhai Revolution that deposed the Qing and birthed the modern Republic, we are reminded that the revolution will be cynical, with no winning side and no one in the right.