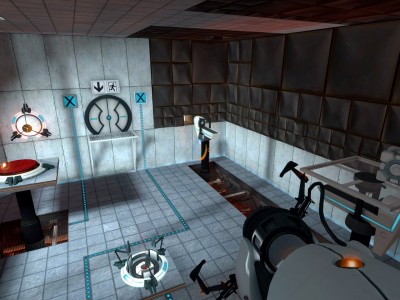 I first ran into Portal (2007) at the Game Developers Conference in 2008. I was interested in narrative and gaming at the time, and had wandered into the session hoping to learn something new about the subject. I had not played Portal at that point, nor did I know that it had been crowned game of the year by various gaming publications and by the conference attendees themselves. I did however notice that the room quickly became packed with people.

The talk, “Integrating Narrative and Design: A Portal Post-Mortem,” was fantastic. I was pleasantly surprised that a first-person shooter puzzle game could have such an engaging story. Or at least, that’s what I assumed from the talk; I wasn’t able to verify their claim until two years later, when I finally laid my hands on the game. And despite the hype, and its age, Portal exceeded my expectations.

The game revolves around a series of puzzles that you solve by creating “portals” with your gun. Wired featured a brilliant illustration (by Jason Lee, below) that depicts the gameplay. 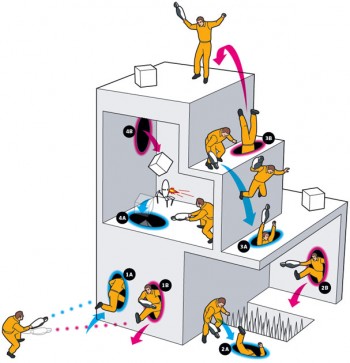 The above diagram might seem like a parody about the game puzzles’ complexity, but in reality many of the puzzles are far more complicated than that. Luckily, they don’t feel that convoluted when you’re in the thick of it. The game narrative was as the team had promised in their talk: One of the best videogame stories I’ve ever experienced. Not a line of bullshit dialogue. Not unnecessary cut scenes. Yet funny, engaging, with a great climax and ending.

Portal is the spiritual successor to Narbacular Drop (2005), a senior project by students at DigiPen Institute of Technology. After releasing Narbacular Drop, the entire team was hired by Valve and many of them subsequently landed on the Portal team. While the predecessor only won small-time awards, Portal is a critics’ favorite, with awards in multiple categories from IGN, Penny Arcade, the A.V. Club and the Game Developers Conference. Originally packaged together with Half Life 2 and Team Fortress 2, the much-lower budget Portal was a surprise favorite in the pack. It is, the team pointed out after they told the crowd in the room about re-using Half Life 2‘s 3D models, a triumph of ingenuity within constraints.

A sequel is in the works, and is slated for release some time in 2011.