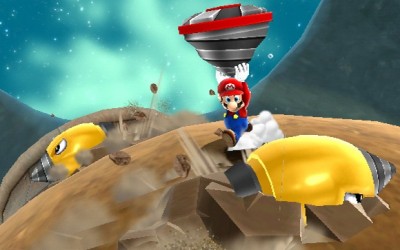 Shigeru Miyamoto, the legendary creator of Mario, claims that Super Mario Galaxy 2 (スーパーマリオギャラクシー2, 2010) is so hard that even he slams his fists on the table in frustration when he plays it. But don’t be fooled by this statement. He says so in joy, because Mario Galaxy 2 is very much Miyamoto’s pet project. According to him, Mario Galaxy 2 was created because the team at Nintendo “hadn’t run out of ideas.” According to his team however, Miyamoto stormed in immediately after Galaxy 1 was completed and suggested they make a sequel using the same game engine. Miyamoto’s reasoned that the the team hadn’t exhausted its full potential. Drained by having just finished a game, the team thought differently, but they were promptly coached back into enthusiasm.

From playing Mario Galaxy 2, it’s apparent that Miyamoto was onto something. Each level in the game feels like an outtake from Mario Galaxy 1, but the kind of outtake that’s zany, clever and more fun than the original. As Wired’s Chris Kohler stated in his review: “There are level concepts here that are only used once that could be made into full games on their own.” Filled with loops and tricks, it’s also clear the team had fun building each stage. This was catalyzed by the creation of a level design tool that allowed sound and visual designers to go ahead without the aid of the programmers. Yet it would be wrong to pin the success of Mario Galaxy 2 entirely on this democratic design process. There’s evidence that Miyamoto had a heavier-than-usual hand in steering the product.

Super Mario Galaxy 2 doesn’t have much of a storyline, just the way Miyamoto likes it. The cut scenes and lengthy exchanges from Mario Galaxy 1 are notably absent. Instead of explaining why Mario has a spaceship or how Bowser plans to conquer the universe, players are simply plopped onto a spaceship and given a series of challenges. This minimalist approach is for the better; heavy-handed narratives rarely have a place in action games, particularly not in ones involving oddly-dressed plumbers, princesses and turtles. Not only did Miyamoto call for a stop to heavy plotting from day one, he even edited the script on occasion, which he hadn’t done for a Mario game in fifteen years.

Yet the major difference between Mario Galaxy 1 and 2 is that the latter is really, really hard. Although critics universally lauded the game (Edge, Gamemaster and the Official Nintendo Magazine all crowned it game of the year), every critic, reviewer and forum-goer warns about its difficulty. On the flip side, a harder game means tighter gameplay; every jump matters, timing is key and that strategically placed mushroom really does help in that tough stretch ahead. Players do inevitably die, again and again, but each victory is twice as sweet. (I often beat challenges with one second left on the clock, leaving me breathless as the congratulatory stars swirled above my head.) As producer Yoshiaki Koizumi says, “It’s rare to see action games as challenging as these nowadays. But I think that’s what Mario’s probably about anyway — players dying lots of times and gradually getting better.”