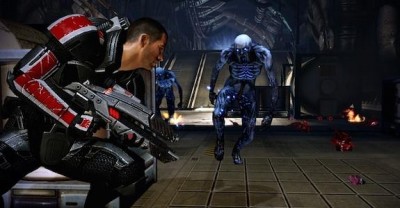 Mass Effect 2 is a hybrid action and roleplaying game (RPG) set in a sci-fi world. It was first released by Canadian game studio Bioware in 2010 and is the second game in a trilogy.

The first thing I noticed in Mass Effect 2 was that my character, Commander Shepard, was charismatic. Her words, gait and voice belied a fierce and attractive personality that went far beyond the charisma points on her statistics sheet. The writers had given her a personality from the start instead of relying on the clumsy industry standard of a blank canvas avatar. It helps that Mass Effect 2 has some of the best voice acting I’ve ever heard in a game (Martin Sheen and cast members from the Matrix and Battlestar Galactica all play parts). As I continued to play, I was impressed that they never threw Shepard in a situation where she had to act completely out of character in order to complete a quest (another industry standard for RPGs).

On par with the characterization is the world building that went in Mass Effect 2. The game takes place in a universe more rich and complex than that of the Star Wars series — not only does it have its own set of alien species, array of solar systems and technology paradigms, it also takes a step beyond the simplistic good-versus-evil morality of Star Wars. Almost every quest in the game pits Commander Shepard and crew in the middle of a local or inter-species struggle: Do you save the hostages who struck first in the war? Is it right to murder a fugitive because she carries a deadly disease? These events take place in one of the most lush 3D environments available in games today; each panel in the wall or skyscraper in the distance has been meticulously designed to create a believable universe.

Undergirding the characters and the world is a solid game engine comprised of two parts. On the nerdier roleplaying-game end is a robust dialogue system that strikes a delicate balance between linear and non-linear: Little by little, your decisions affect the outcome of the game and the personality of your character, but there’s no straying from the main plot or mission. On the action end is a solid third-person shooter game engine. You equip guns, magic and mechanical powers and, alongside your companions, blow shit up and shoot down enemies real-time. These action sequences are exciting, particularly as they are highlighted by a dramatic score, though they lack of the fine tuning of pure (first-person) shooters like Halo or Gears of War. 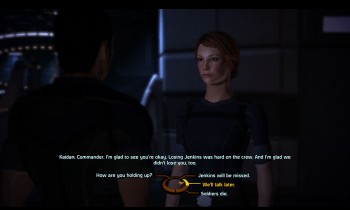 In the first week after its release, Mass Effect 2 sold over two million copies on the PC and Xbox 360, prompting Time to quip that it was “the Avatar of video games — except… better written.” While it was just shy of winning game of the year at the Game Developers Conference 2011, it did garner the award for Best Writing. Which is not the say there are no awkward moments in the dialogue or details that feel forced, but like many great novels and movies, Mass Effect 2 requires of a certain suspension of disbelief in order to enjoy it. And trust me, it’s worth it.