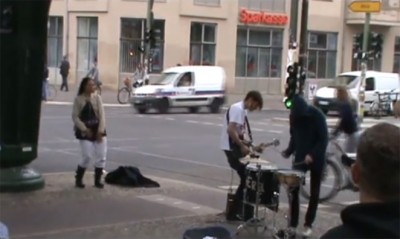 They are young. They are German. They play in Berlin.

Three conditions that might be enough to be something in the European music scene. No CD releases to date. You find them playing in parties, in the subway or  in the Berlinale [Berlin International Film Festival].  Basically you find them in every cool place where the cool people  of Berlin are supposed to be. You check their list of concerts and you can see, the band enjoys playing live.

In fact they are an anti-studio band; their persona is based on an improvisational we-can-play-anywhere attitude. Three members – guitar, drums and keyboard- and two speakers, all members stand, and the letters (C A M E R A) are pasted as stickers on nearby walls. They always look like they’re ready to move.

As with many other bands, the well thought out gimmick is there too, behind the music. But they still look absolutely fresh, like a garage band playing in a corner. In an ideal world you would call them, bring them to a park and make a little neighborhood party. In reality, you need some permission or a day when the police are really, really busy.

They are WE ARE CAMERA and they make noise. Hypnotic, repetitive, solid noise.  Much guitar but not too much, an absolute lack of interest in showing off how good they are as musicians. Maybe they are not. What they give you is a constant presence of drums, the rhythm the variations and the progressions. A bit of Yo La Tengo, a bit of Joy Division with the added intensity of electronic music. Not so much brainy but that is perhaps the point. A certain feeling of tribalism and your insides boom along with the music. A kind of music people tend to listen in silence and find hard to dance to — I imagine myself dancing nude and with my body covered in mud, but Berlin may not be ready for that yet.

The band’s tense energy creates an interesting effect on the audience, drawing you in, bit by bit. After a duration of playing, or perhaps what could be considered a song, one of the band assistants hands out drumsticks to the audience to use on whatever surface they can find — be it public benches, garbage cans or subway station walls. Having seen it in action, I can say it works really well, so much so that the first time I thought all the participants were other musicians who were friends of the band.

There are no vocals, just drums, guitar and keyboard. The lack of lyrics make the experience even more primitive and authentic, and accessible to everybody. Let’s see. I read some mention of bands and mashed-up genres but I would wait before starting with big theories. For now, just listen. And try to see them live. In a random street. In Berlin.