Don’t let its primitive graphics fool you; Minecraft may just be the next big thing in gaming. With its chunky pixel-art aesthetic and loosely bound gameplay, Minecraft is already a poster child for the indie game development movement. Its founding story reads like a developer’s fairy tale: Markus “Notch” Persson made games since he was a kid. While working at a day job, he started making Minecraft in his spare time. Soon his full-time job became a part-time job. After a couple of months, as Minecraft took off, he quit his job to focus on it full-time. At the time of writing, Minecraft is still in beta, Persson has been joined by a team of seven and over two million people have bought the game.

The brilliance of Minecraft is the amount of freedom it gives you. During the game’s daytime, you collect (mine) resources to build (craft) tools and structures. Then at night, you fend off a zombie horde using weapons you’ve made or barricade yourself in a fortress that you erected during the day. Beyond that, you are free to play as like: There are no formal levels and no way to beat the game. Between free exploration (you can roam the world above ground, dig deep underground until you reach a molten core, or, as of Alpha Version 1.2.0, craft a portal to visit Hell) and seriously-scalable building (fans have not only recreated wonders of the world, they’ve also used Minecraft‘s logic-gate pieces to create building-sized computers), there’s no need for there to be an end game. If those feats sound daunting, you’re free to play a low-key game as I did, biding my time, building a hut by the beach, digging a small moat around it and decorating my bedroom with a skylight. The analogy with Lego, one that many others have drawn, is apt. 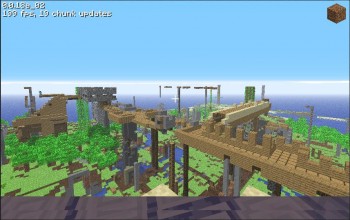 What may put Minecraft above and beyond Lego (aside from not having to buy a million bricks) is its multiplayer capability. The ability to easily fend off zombies alongside your friends in a contiguous world is one killer feature that the latter lacks. Nor can Lego enthusiasts share fully-functional copies of their creations online.

But before Minecraft can take the crown, it has some work ahead of it. First and foremost, the game’s lack of explanation about how-to-play hinders newcomers and requires players to sit through lengthy FAQs or Youtube tutorials. Guiding new players through this without killing its powerful sense of freedom will be a challenge. Secondly, the balance of the game could do with some polishing so that casual players are better rewarded. Lastly, it will have to scale up its operations to offer fully-functional massively-multiplayer capabilities and create a hub for enthusiasts to swap and share their creations.

The question remains whether Minecraft‘s deliberately primitive graphics and non-linear gameplay will put off mainstream gamers and prevent it from being a bestseller. But for now, Persson can rest on his laurels, and on the €23 million Minecraft has already earned.