Between 2001 and 2010, Brian Clevinger went from an amateur webcomic author to a professional comic book writer, sought after by  Marvel and DC. This nine year span also marks the life of 8-bit Theatre, a free, online serial that put his name on the map and propelled him into the comic book industry. As Clevinger himself admits during interviews, “8-bit Theatre gave me the platform, experience, and confidence to launch Atomic Robo years later… and Robo lead to the Marvel stuff.” But it would be wrong to belittle 8-bit Theatre as merely an online forum where Clevinger found his voice. The strip embodies some incredible qualities, and at its peak, was followed by hundreds of thousands of fans from around the world.

8-bit Theatre originally started off as a class assignment for Clevinger, who was tasked with making comics to study the process behind-the-scenes. The professor in charge of the class had trouble keeping track of submissions, so Clevinger posted the comics online. He shared these comics with a couple of friends, who shared them with their friends, and soon enough, the rest of the internet had found them. More than a thousand strips and almost nine years later, Clevinger had created something of an icon for videogame and webcomic geeks on the internet. Below, for example, is a fan tribute to 8-bit Theatre: one of its main characters, lovingly built in Minecraft (it takes hours to do this) next to the Super Mario Brothers’ Bowser. 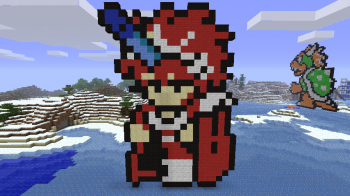 It’s ironic then that the icons Clevinger popularized are not entirely his own. 8-bit Theatre  borrows its cast of characters from the classic 1987 videogame, Final Fantasy. In fact, Clevinger takes the graphics for his main characters directly from the 1987 game and blows them up to fit modern screen resolutions (hence the blocky, pixelated look). He also uses the premise of Final Fantasy‘s story as his starting point: Four light warriors out to save the world. But the reliance on the videogame ends abruptly as Clevinger toys with its graphics and parodies its plot. What 8-bit Theatre becomes then is the story of four dysfunctional light warriors fumbling to save the world, being sidetracked by quests, derailed by each other and taking other people’s credit when things go well for them. Monsters are, more often than not, defeated with lines of clever dialogue rather than heroic feats of action.

Testament to Clevinger’s writing ability, he manages to stretch this slapstick plot out over 1225 strips, keeping it entertaining till the end. 8-bit Theatre‘s core feature are its five main heroes, each of whom is deeply flawed in their own strange way. Thrown into the mix with one another, the result is some incredibly amusing gags that play off their quirks, flaws and Final Fantasy classes they’re supposed to represent (fighter, white mage, black mage, red mage). There’s almost always at least one punchline per strip. Surprisingly, amidst this constant mayhem, the characters do manage to grow, though it would be a stretch to say they mature.

Ironically, the strip’s nine year run probably did Clevinger more good than his fans. Readers have complained that the jokes became repetitive after several years. But for his part, Clevinger had the opportunity to continuously practice and polish his skills regularly in front of a steady audience. And Clevinger didn’t just stop there; numerous projects were launched during 8-bit Theatre’s reign. These include not only collaborations with other webcomic artists but Atomic Robo, his seminal work (highly recommended), which has been nominated for two Eisner Awards. In fact it’s hard to read Atomic Robo without seeing 8-bit Theatre‘s influence. Like 8-bit Theatre, Atomic Robo doesn’t take itself too seriously, employs some great pieces of dialogue and manages to make world calamity seem like a fun sport.