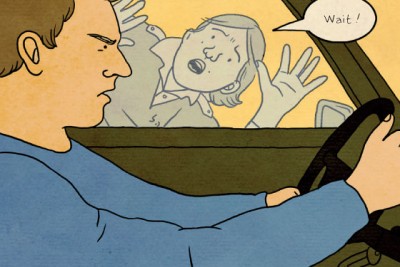 It’s hard to believe that Exit Wounds is a work of fiction. Set in the city of Tel Aviv in 2002, the book revolves around an unidentified victim of a terrorist bombing. The story begins when Koby, the main character, is accosted by a stranger begging to know if the deceased victim was his father. Koby’s immediately placed in an awkward situation, because he’s currently estranged from his father. The plot continues to unravel as Koby is forced to deal with his relationship with his possibly-dead father, and as he discovers more about this mysterious stranger who’s tracked him down. Author-illustrator Rutu Modan keeps her focus on Koby and his relationships, never succumbing to name and blame game of politics. In this way, Modan paints a vivid portrait of real people in Tel Aviv, for whom the bombings are an ever-present yet surreal occurrence.

Modan’s subtle style of storytelling adds to the realism. Characters do not appear in Exit Wounds with a splash; they are silently introduced and built upon, layer by layer. Similarly with the relationships and events in the book, which are given the time and space to grow and reveal themselves to the reader. So although the story starts slow, the overall narrative accelerates steadily throughout and reaches a satisfying climax. It’s no wonder that Modan based many of the characters in Exit Wounds on people she knows, but it is a surprise that she’s able to weave them all together in such a coherent tale.

Before writing and publishing Exit Wounds, Rutu Modan was already a prominent member of the Israeli comics scene. After graduating from the Bezalel Academy of Art and Design in Jerusalem in 1992, she spent a few years working as a freelance illustrator and animator before finding her big break with the Israeli edition of MAD magazine. Although Isreali MAD did not last long, it gave her and her peers the experience and confidence to launch Actus Tragicus, an Israeli comic artists’ collective and publisher which still exists to this day. Along the way, Modan has also managed to garner a few awards from the Israel Museum in Jerusalem, the Israel Ministry of Culture and the the International Board on Books for Young People in Basel. Exit Wounds, her first full-length work, was the proud recipient of an Eisner Award. 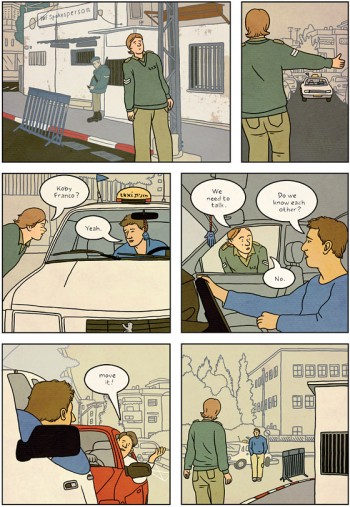