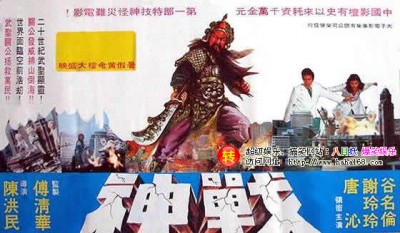 The cult film plays a rather distinct role in the Hong Kong cinematic imaginary: not necessarily a bastion of kitsch or camp ripe for nostalgic or underhanded rehabilitation, it is more often here measured by its absurdity. Playing along the fringes of possible realities, such movies would often be lost to time were it not for a certain mythical status that allows them to reappear in the cultural consciousness at indeterminate intervals. Just a few years ago, for example, the fancifully titled Guan Yu vs. Aliens (Guan Gong dazhan waixingren) consisted of a single black-and-white photograph, a movie poster, and a handful of newspaper clippings from its 1976 release in Taiwan (where it was originally known as War of the Gods or Shen zhan); sustained by the classy aura of the lost masterpiece, it was ripe for rediscovery. Now, indeed, we have access to clips and, through certain venues, even a digital file of the majority of the movie, and it cannot be denied that the Chinxploitation plotting and direction more than lives up to the premise of its title: the red-skinned ancient martial hero turned god of loyalty and brotherhood, Guan Yu, defends Hong Kong against giant, comical invading aliens, protecting the sanctity of the old Legislative Council building but failing to prevent the fall of the Tsim Sha Tsui clock tower.

Hong Kong may play a key role in the set of the movie, but this production was actually almost entirely a Taiwanese effort — billed, in fact, as the first Taiwanese disaster movie (questions might be raised as to how, precisely, an alien invasion of the British colony might have qualified as a particularly Taiwanese disaster). Reports have it that it was for political reasons that the background was shifted to Hong Kong; the Taiwanese government feared attacks on its credibility or a sullied name, which apparently not even Guan Yu could handle. This, of course, marks a huge gain for the cultural credibility of Hong Kong, as the film really does have it all: a dying artist (and implicit critique of the state of modern sculpture), mad scientists (and the political consequences of devotion to reason), and physics-defying swordsmanship.

There may not be much to say in terms of acting or directing, but the sheer imagery of the movie provides fodder for many theses to come on the “scientific mythologies” (a publicity tagline straight from the producers) of moving image culture in transition-era greater China. And indeed, as one of the few existing visual fragments of Chinese science fiction — what we might call an alternative postmodernity — we can expect that this aesthetic will soon return with a vengeance.

Look out for the forthcoming re-release project, tentatively titled Guan Gong vs. Aliens Redux and helmed by Pang Ho Cheung, that will make extensive use of the original print but will incorporate new voice acting from names including Miriam Yeung.