Even though film is primarily a visual medium, sound and in particular spoken language is a crucial part of any motion picture’s narration. There is a whole sub industry of film people dealing with all kinds of languages from all kinds of films. For foreign films local distributors usually apply subtitles, to, not only preserve the original but also make it accessible to a wide audience. This procedure is very common in most parts of the world. However, there is this non-uniform territory with a bunch of stubborn countries on continental Europe. Here, the music plays a different tune. Showing a foreign film in its native language with subtitles would be a financial disaster. A movie needs to be dubbed into the country’s language otherwise it is literally not existing. Subtitled versions are regarded for small art-house theaters only, seen by a tiny circle of film critics and intellectuals who have international film festival experience.

Hence, everything needs to be dubbed. The film and TV dubbing industry in France, Germany, Italy, Spain or Portugal is a steady and important part in every post-production process. After the 2nd World War the art of dubbing was brought to such a perfection that a good dub could determine the rise and fall of a film. Even today, audiences can distinguish whether they hear a good or bad dub. Usually this also sets the overall quality of a film to the audience. Since dubbing was and still is exploited by the local censorship authorities it also can give tone and direction of a film severe changes.

However, dubbing culture and reputation among the European countries is quite diversified. While in France some voices can market themselves equally as stars like the actors on screen, in Poland a single voice artist will speak every role of a film in a monotone volume and tune. Usually it is the same man and he is known all over the country. Culturally quite the contrary is Germany. Here the dubbing industry lives a shadow existence. It is quite common that big Hollywood stars will be spoken by the same voice artist. That way distributors build up an audio trademark of those stars that can last about 20 to 30 years. While German audiences link the German voice directly to the movie star, the actual people to whom those voices belong to remain widely unknown, except for one.

In order to gain a better understanding of this dubbing culture it is best to pick out one special figure from this very European dubbing community and dig a bit deeper into his works and past. One of the most influential and cutting-edge German dubbing artists during the past 40 years was Rainer Brandt. His work could turn a lousy trash film into a money making machine and it often did. He shaped the language of entire generations and is still one of the best known voices throughout the German film industry.

Born 1936 in West Berlin Brandt started acting school and eventually moved to theater where he quickly gained fame as up and coming stage actor. Soon he became a star on Berlin’s Broadway, the Kurfürstendamm. By end of the 1950s he also was offered acting roles in movie productions alongside some of the biggest stars of the time. To non-German audiences he might be best know from Guy Hamilton’s spy thriller Funeral in Berlin (1966). Parallel to his stage and movie appearances his dubbing career emerged. East German DEFA studios hired him for a couple of voice acting jobs.

Soon he founded his own dubbing studio and subsequently went into the writing of German dub scripts. By the end of the 1960s his studio got in a couple of biker films from the US. Grindhouse style road movies in which the actors spoke in heavy dialect driven by street language. Those films were supposed to be funny in a gritty way. As Brandt realized the translated dialog scripts he was given made no sense at all, he started applying severe changes to the text. All the humor that had gotten lost during direct translation was reinstated. But not in the original sense. Brandt took the underlying themes and direction of the dialog and transformed them into a new, very local German humor.

The so called ‘Schnodder-Deutsch’ (snot German) was born, Brandt’s very own verbal invention. He explained it himself as being “a mix out of Berlin dialect word creations, Yiddish, a bit of mob and a bit of gutter (heavy colored street language). Loads of humor paired with fantasy. All this not following logic but rather the motion of the actors. And how do people speak with each other? You know that from every bar or event. Sentences are being started but cut off right in the middle, the train of thoughts goes another direction. That’s the way people speak when they are unwatched”.

The breakthrough with this revolutionary concept came 1971 on The Persuaders, starring Roger Moore and Tony Curtis. Despite its star power, this TV series had rather less entertaining scripts and was not attractive on its British home market. Persuaders quickly tanked in all territories except Germany. Due to this failing, the back-then brave German TV station ZDF that bought the show’s license granted Brandt full creative control. The series turned into a TV blockbuster, a real sensation. Right after airing one episode Brandt’s verbal creations were used on the streets, at home or at office. People adapted every single word into their own tongue. Some of Brandt’s new word compositions like “Tschüssikowsky” (a mix of goodbye and Tchaikovsky) are regarded as a cultural treasure. 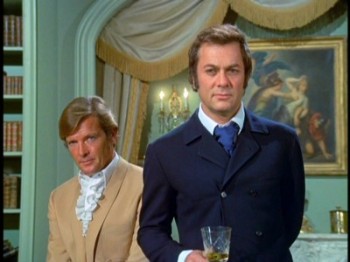 In Brandt’s understanding “one cannot translate humor one-to-one. It’s impossible. The Americans, the French have a total different sense of comedy… One needs to sit down and think about, what the scriptwriters and directors intentions were in the original.” Somehow his language amplified the acting between the Moore-Curtis duo tremendously. Even the pace of the series seemed to be faster. But Brandt did not re-cut or interfere with the editing. He simply added so much new content on the audio layer that Persuaders gained a richness which it made it fun to watch. It was new, it was fresh and it was unique.

Usually Brandt would add lines for characters who were off camera, linking them back with verbal responses from the characters on camera. But he went even further, building insider jokes right into the episodes, occasionally crossing the boundary into reality. For instance, Curtis’ character once justified a wrongly-parked car by saying he would do the same on the ZDF’s parking lot. Another time, he directly referred to Moore’s character as the actor who is about to play James Bond. (When the show aired, Moore just signed the 007 contract.) He even made fun of himself when Curtis’s character said; “Now you have to speak a bit faster, otherwise you aren’t in sync anymore”.

All those cross-references elevated Persuaders‘ entertainment value and turned it into one of the most successful and legendary series in German TV, a series that is being broadcasted on a regular basis, even today. When the show’s creators realized its success they approached Brandt with the request to write all original shooting scripts. Unfortunately Moore and Curtis had personal issues and the series was cancelled.

After that, Brandt moved onto something even bigger, a business that would persist for the 20 years to come. He took on dubbing for Spaghetti Western films. During the mid-1970s this popular genre was about to die; producers and distributors were trying to prolong its shelf life by transforming it into comedy. Two stars emerged from this boom of second-grade Spaghetti Western comedy productions, Bud Spencer and Terence Hill. Senseing the vast opportunity, Italian producers soon brought Brandt directly on their productions to write and consult on their Spencer/Hill scripts as well as conduct the German dub. 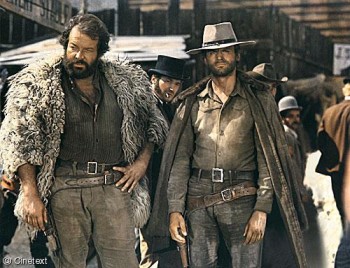 By the end of the 1970s having Brandt on board brought a huge comfort to the actors. On set, Spencer once said to another actor who could not remember his lines, that he does not need to care about what or how he said things, “Rainer will fix that in dubbing anyway”. And indeed, sometimes actors do not even move their lips at all while ‘talking’. Since what they ‘say’ is funny, no one cared about whether they are synch or authentic. Other dubbing studios tried to jump on the bandwagon and imitate Brandt’s style. A huge wave of trash Westerns and Easterns were flooding the VHS rental store in the 1980s. Sleazy action and B-movie flicks saw re-releases in new comedy dubs. Everyone tried to be Brandt-funny, but no one managed to best the master.

Surprisingly, Brandt also worked on serious, big budget films from overseas. His studio dubbed blockbuster like Never Say Never Again, Murder by Death, Conan – The Barbarian, Rambo, Missing in Action, Meet the Feebles, Beetlejuice or even Coppola’s Rumble Fish. Famous TV series like M*A*S*H, Fawlty Towers,  Seinfeld, Frasier received authentic, quality dubbing. Most remarkable was his work on David Lean’s A Passage to India. The dubbing was so accurate that the great director himself called Brandt up and thanked him for his contribution.

Today, Brandt’s comedy dub works are as popular as they were 35 years ago. He is still being referred to as the ‘dubbing pope’. By now, YouTube holds a vast library of video clips with the best dubbed scenes from his films. Brandted films became a trademark, a constant pillar in German popular culture. Somehow he managed the impossible, his verbal creations seem to be immortal, skipping generation gaps with casual grace. No matter how the German language will evolve or how many new words will penetrate youth culture, Brandt’s humor is still on top. Tschüssikowsky!

Officer at supply room: “What do we got?”

Spencer: “Don’t know what you got.”

Officer: “For one foot or both together?”

Officer (gets some boots): “Try if those fit. Otherwise we only got the children’s coffin left.”