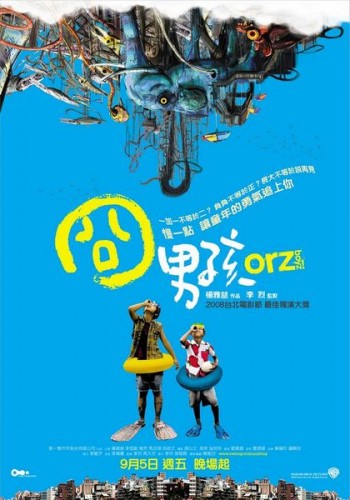 Theodor Geisel, better known as Dr. Seuss, wrote, “A person’s a person, no matter how small.” Orz Boys director Yang Ya-Che certainly subscribes to this theory. The 2008 Taiwanese movie follows two young boys who everyone refers to as No. 1 and No. 2. (Except their frustrated teacher, who calls them Liar No. 1 and Liar No. 2.) Much like childhood itself, the film caroms from hilarity to hysteria, and is by turns fanciful, funny, and heartbreakingly serious. The emotional twists turns the characters experience will be familiar to anyone who was ever a child, but there are some elements of the story which are particularly redolent of modern Taiwanese society: a traditional family unit is undermined by the modern economy; the ghosts and deities one generation subscribes to are supplanted by aliens and toy robots in the next.

No. 1 and No. 2 are both primary school children. Neither come from happy homes – No. 1 lives with his mentally disabled father and No. 2 with his overworked and unhappy grandmother. In and outside of school, they are by turn heroes and villains, opportunistic and naive, cruel and vulnerable. The beauty of the film is how quickly and wholeheartedly the boys inhabit these rapidly changing and often overlapping roles.

Pang Chin-Yu and Lee Kuan-Yi deliver virtuosic performances as No. 1 and No. 2, and Mei Fang, the girl one of them has a crush on – and the only person to be invited into their private little world – is also excellent. The film is worth watching for the acting alone. I found it impossible to believe that the two boys were actors, and yet couldn’t believe that any non-actor could have done the job.

Orz Boys is shot through with absurdity. The boys are convinced that the statue out front of the school moves, that the robot toy No. 2 covets can come to life, and that if they can achieve hyper-speed they will be transported straight into adulthood. Excellent animation illustrates their whimsical but strongly held beliefs.

The main criticism of the film is that it lacks a strong narrative. While that’s true, I don’t think it’s a significant flaw – much of what makes childhood so tough is the feeling it will never end and the way this limited awareness of the passage of time makes each moment deathly important. Orz Boys succeeds due to Yang’s refusal to flatten childhood into one dimensional tropes. Shot from the viewpoint of the children, not the safe remove of a nostalgic adult, Orz Boys is simultaneously messy, moving, and completely worth watching

The original title of the film 囧男孩 contains the character 囧 (“orz”). According to Know Your Meme:

“囧 is a Chinese character that is commonly used as an emoticon in China, Taiwan, and Hong Kong. However, it is also used by non-Chinese speaking countries as well, especially in Korea and Japan. Because it resembles a person with an open mouth, it is used to convey distress, helplessness, disappointment, reluctancy, shock, dislike, defeat, embarrassment, and the like.”