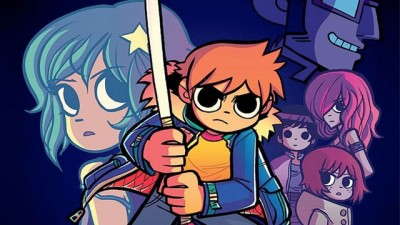 The making and success of Scott Pilgrim are a sign that videogames really have infiltrated our popular consciousness. When captions such as “+9999 EXP” and “Level Up” are casually assigned to characters without explanation as punchlines, it presumes the audience understands the basic game framework of a hero gaining experience points through trials and subsequently leveling up their abilities when the accrued points hit a threshold. A mouthful to explain and, in the case of both Scott Pilgrim the comic and Scott Pilgrim the movie, a mouthful left unexplained for the unwitting members of the audience.

The plot premise of all of these Scott Pilgrims is that Scott Pilgrim has to defeat his girlfriend’s seven evil ex-boyfriends to continue dating her. Despite the underlying love story, the comic reads like an action-comedy. Its pages are well-illustrated with bold lines, the panels flow smoothly flow between one another, and the dialogue is snarky, snappy and hilarious.  What makes Scott Pilgrim special is the melding of a videogame world with the real world, and the direct application of videogame devices into the comic, visual or otherwise.

The universe of Scott Pilgrim is split into the real world and the “subspace,” though the two overlap more and more as the story progresses. The former is based on the modern day city of Toronto, Canada. The latter is a surreal, videogame-like world that links up to the former through Scott’s dreams and through mysterious floating doors. These intersecting worlds, never a major plot point of the comic, add an element of the suspense and fantasy without taking themselves too seriously.

Additionally, the seven evil ex-boyfriends are set up like the gatekeeper-bosses at the end of a videogame level, replete with supermoves, exploitable weaknesses and a fat reward upon defeat. Portraying Scott’s romantic opponents as such allows for a much richer and structured sequence of battles.

Unlike the narrative devices that ramp up, visual devices borrowed from videogames appear sporadically but frequently throughout the book.  One of its earliest applications is during the introduction of characters, when a small dialog box hovers next to the person with his/her basic information plus an ironic detail: 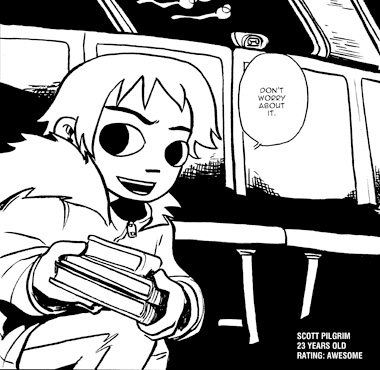 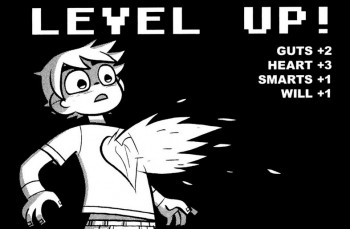 Videogame aesthetics also make an animated appearance in the movie, which sports some incredibly fun action sequences that manage to use a split screen effectively.

While both the comic book and movie utilize videogame visual and narrative devices, the application has not led to the same result. The comic, despite being a product of the ailing print publishing business, sold millions of copies. The movie, on the other hand, flopped in the theaters and did not meet its commercial goals. The differences are in their stories, and no amount of beautiful visuals and effects can fix that. The six-volume comic book series is well-paced, takes place in a consistent universe and stars a cast of silly but ultimately complex characters. The movie, unfortunately, follows an erratic rhythm, references the subspace world so rarely that it’s confusing, and stereotypes characters to further the plot.  That isn’t to say the movie does not have some great scenes and screen compositions, but that the clever application of videogame devices cannot save a weak story. Perhaps then, the box office failure of Scott Pilgrim vs. the World should not be attributed to the public’s unwillingness to accept new, vidoegame-influenced norms, but to their unwillingness to stomach a bad plot. 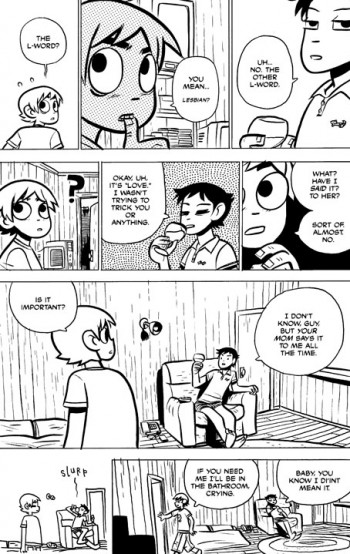