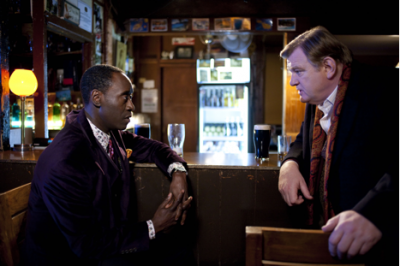 In our carefully politically correct world, Sergeant Gerry Boyle (Brendan Gleeson) is a refreshingly cheeky change. Never one to suffer the word “paraplegic” when the word “spastic” will do, The Guard’s Sgt. Boyle is a loose cannon who just happens to work as a law enforcement officer –– specifically, a garda, the Gaelic word for guard. Mr. Gleeson, probably best known to the casual moviegoer as Alastor “Mad-Eye” Moody in the Harry Potter franchise, is a revelation in The Guard.

Apart from the odd joke dropped about the IRA or MI5, McDonagh does little to contextualize his film in regional history, politics, or culture, which may be a disappointment to some viewers. It is almost as if the fantastical story events take place in a vacuum, separate from Ireland’s wider real-life narratives. Above all, the director is interested in bringing his clever script to life with glorious images pulled from Boyle’s stomping ground, a remote, rainy patch of County Galway. McDonagh colludes with his eminently talented cinematographer, Larry Smith, to enliven their location’s muted palette by making eye-popping colors bloom brightly in virtually every frame. The inclusion of psychedelic colors in an otherwise featureless setting often makes for sight gags. A bright orange Volkswagen Beetle trundles up to Boyle waiting somberly on an empty airfield. Boyle opens his front door to a visitor while wearing a sapphire T-shirt and ripe red Y-fronts (“let me just slip,” he murmurs, “into something less comfortable.” This something proves to be a glossy robe in royal purple). In The Guard, Gleeson’s roguish charm is out in full force to play a character as irreverent as he is unpredictable.

Boyle’s unique professional style clashes comically with that of uptight F.B.I. agent Wendell Everett (Don Cheadle). Cheadle plays the straight-laced man to Gleeson’s whacky wild card in what is essentially an affectionate buddy picture. Flown in to investigate a drug-smuggling ring operating out of Boyle’s turf, Agent Everett gets a crash course in how his new partner operates while showing him head shots of the three suspected traffickers, all of whom are white, in one of the movie’s funniest scenes. Boyle pipes up: “I thought only black lads were drug dealers. And Mexicans.” Chastised for his racial slurs, he returns, unfazed, with: “I’m Irish. Racism is part of my culture.” Insensitivity that would elicit gasps in any other context is transmogrified, here, into evidence of Boyle’s unflappability. For all his risible doughiness, Boyle always has the upper hand. He is the epitome of cool.

The Guard espouses the ethos that style trumps all. Given how beguiling its own stylishness is, it’s probably right. 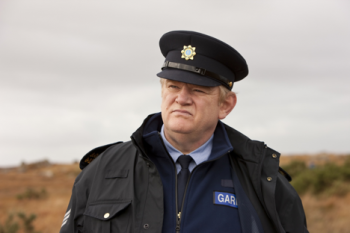